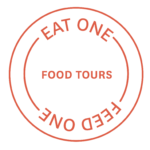 Hi there! This is where I’ll share thoughts on sustainable travel and recommendations of shops, bars, restaurants and anything I like and think is worth sharing about San Sebastian and goes in tune with Eat One Feed One’s food travel philosophy: The empathy created when traveling helps reduce bias and barriers, which ultimately makes the world a better place; and if you do it through food, it’s so much more delicious!

How Eat One Feed One food tours came about.

Let me start by drawing this picture out in a sandwich format, each layer and chapter will represent a train of thought, each as important as the next. You couldn’t really have one without the other like in a properly delicious sandwich.

The bread layer represents my background and moving countries.

The bread is the base layer and foundation of this story.

FYI I like my bread toasted and crunchy on the outside and, soft and steamy on the inside.
Throughout my first degree in corporate and strategic communication in Mexico City where I grew up, I couldn’t stop thinking about food. The thrill of cooking it, sharing it and eating it and so when I graduated I decided to move to San Sebastian in the Basque Country. This city is one of the foodie meccas of the world and here I studied a degree in Science and Culinary Arts thinking I’d become a chef. Little did I know that although I LOVE cooking for others I didn’t want to be in a kitchen and be on my feet sixteen hours a day without being able to talk to customers and see if they were enjoying themselves or not.
I kept thinking: ¨what if they didn’t know the story behind what they were eating? Who’s going to share it with them?, how are they going to know that what they’re having is so special?¨
I tried working in front of house, serving customers, greeting them, it was great but it wasn’t enough…
I didn’t want to be one of those annoying waitresses that never disappears and stares at your every bite. I just wanted to sit down and talk to people about the food! During my degree I specialized in culinary entrepreneurship, which basically means you get to work in any business related to food.

I do have to specify that during this base-layer-of-a-time I found myself adapting to a new culture which I thought was absolutely fascinating! t I also have fond memories of my first few years in San Sebastian. Now looking back I hadn’t really thought out the magnitude of my journey or how big the change in my life would be. I’d crossed the Atlantic not really knowing what to expect and, occasionally found myself having some rather awkward encounters, this time also came with tough moments. Sometimes people would pigeonhole me or assume negative things about me because of where I was born (Mexico). My accent in Spanish threw people off as its totally different to the Spanish from Spain and, every time I met someone who judged me or got carried away with a negative stereotype or prejudice about my birth place something clicked.

I realized I had a thought that I carried for a long time: If only I could pick these people up and pack them in my bag, pop them on a plane and show them the wonders of my city, my friends, my family and of course the food they would see it all under a different light. They would fall in love with it, they really would.
It took me a while to understand that it wasn’t their fault that they were politically incorrect or so blunt in their negative comments but that, most people who judged me had never really met many other people from Mexico, some of them didn’t even know where the country was and let alone know about the culture and history.

I then had another thought that whacked me on the head like a brick. I had encounters some more subtle than others, where I was judged or made fun of because of where I was born which obviously hurt. But could it be that I was doing the same thing with others? Judging without knowing? That really shook me.

Prejudice (prej·u·dice)
/ˈprejədəs/
noun
1. preconceived opinion that is not based on reason or actual experience.

“Prejudices, it is well known, are most difficult to eradicate from the heart whose soil has never been loosened or fertilised by education: they grow there, firm as weeds among stones.”
― Charlotte Brontë, Jane Eyre

Next up chapter two: the spread layer. Mayonnaise or mustard, anything spreadable really I’ve even used pesto (I love pesto!)